Developers now have the privilege of Angular 9.0. Even before COVID-19 could stall the economy. Angular is ubiquitous for app development brains; this improved version will make life easier for many. To know it better you go through the piece and don’t have to swim deeper in the ocean.

8 mins read of yours will suffice the need.

The reason I want to express my intellectual property to the audiences is to entail app development, which I’ll be like a ‘’walk in the park ‘So my efforts would be to make as concise as possible rather than make it a full-on technical documentary. Hope this’ll be a more than a stopgap.

We’ll cover the following points to decode it:

“Like in Cricket, every ball is different, and you can’t expect the same execution. By some measures, development is similar”.

When it comes to the execution of codes, developers always are having a hard time. They have to come up with something special to set the tone right. But technology is —a double whammy. Intricacies & Redressal are part of their working regime- anyway, my best wishes to would-be developers.

Till date‘Angular 9 is one of the popular versions of Angular, which acts as a framework for building web and mobile App with JavaScript or more precisely, a super language called TypeScript built by Microsoft’.

Modern age technology and contemporary politics are similar. By and large, there’ll be criticism from all corners.I say it is my favorite as it has its own set of distinctions that I’m going to cover.

Angular 9.0 is an improved version of what we have already gone through. It has scalability, consumes less time. Most probably, it is based on Ivy. I know the hassles related to web/mobile app development never ends. Making Angular 9 is my all-time favorite. 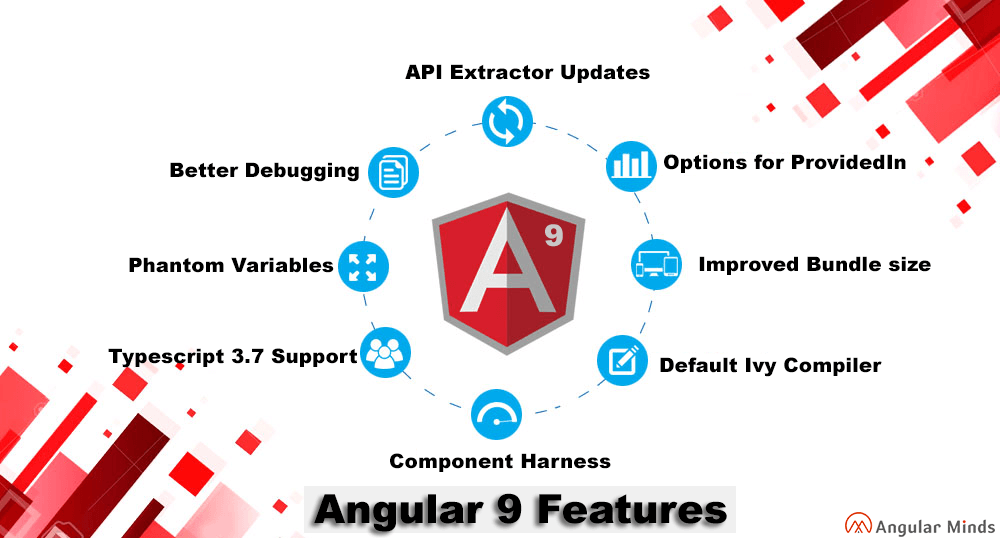 Version  supported.: All Prior versions have been obsolete now, only 8x will have support until 20 th Nov 2020. They are Making Angular 9.0 flavor of the season.

The reason why I am excited about Angular 9 is because of its distinct features.

It comprised of many changes :

Often it is realized that large volumes of data make an application more prone to crashes and downfall. The same goes for angular as earlier versions would ridiculously take more time.

The inclusion of the Ivy compiler makes the process more suitable as it is a COMPILING & RENDERING Engine. By all means, this has silenced the critics by resolving common glitches with Angular.

IVY: A Goal Setter or Game Changer in Angular?

Ivy: A game-changer in Angular 9.0, where front-end support is the IVY Engine. It is different in a way because it has completely transformed— the internal framework without even changing the transcript.

With Ivy, both small and large apps will see improved bundle size savings thanks to Ivy’s tree-shaking feature, while eliminating dead-code.

Your JS framework is a compiler. It’s appropriate for most JS frameworks out there, but it’s especially true for Angular.

Here are the conclusive facts:

For instance: In Angular, when you write a component, you write the part in TypeScript and its template in HTML, further augmented by  Angular template syntax (ngIf, ngFor, etc.)

A  big part of Angular is its compiler:

Here, HTML is like a fuel to generate JS code.

Though rewriting is not new’ the last rewrite was executed in Angular 4 without raising any brows. By far the deepest rewrite of the internals since the initial release of Angular: the Angular team is changing the engine (previously called View Engine) while driving.

This compiler (and the runtime) has been completely rewritten over the last year and gives you a better understanding of Ivy. This is not the first rewrite: Ivy stands for ‘IV’,4 in roman numbers.

By far it is the deepest rewrite of the internals since the initial release of Angular; the Angular team is changing the engine (previously called View Engine) while driving.

“IVY for angular is like what android is for mobile O”.

It achieves the same with this effort: Ivy is a complete rewrite of the compiler (and runtime) to::

🔥Better build sizes (with a generated code compatible with tree-shaking)

🔓unlock new potential features (metaprogramming or high -order components, slow component loading  instead of modules, a change detection system not based on zone.js…)

How  IVY A masterstroke in reducing Bundle Size?

This is self -explanatory as earlier versions had big size bundles which eventually resulted in flawed output. Understanding of View Engine is essential.

Angular view engine absorbs in written templates and components which translates them into regular HTML. and Javascript to- read and display.

View Engine: In Angular 9, the new compiler and runtime instructions are known as default  IVY is the default compiler.

Earlier when compiling any component e.g.

The problem arises during the mapping of these two codes, resulting in delayed outputs. To avoid this Angular team removed the factory.file by adding template code within the javascript code itself.

Unlike older versions, you don’t have to debug through a framework that eats out precious time. You can do it in the component itself, which helps in debugging code instantly.

Angular 9.0 has the capacity to Ivy compiler and runtime handle style predictably. In outdated versions, if an application contained competing definitions for a style, those styles tend to interchange.

With this Angular 9.0 feature, one can manage styles through a CLEAR, CONSISTENT order of precedence with little dependence on timing.

Ivy is not only efficient but meets safety parameters too which makes it a better compiler. It is known to speed up build times. And taking less time for the builds to complete. Enabling all the error messages for better readability.

Enables the AOT Compiler on by Default

The architecture of Ivy brings improvement in the compiler’s performance. It means  -AOT builds– will be relatively faster. Compiler and runtime changes would eliminate the need of entry components. and serve. The latest version of components in Angular 9 will compile automatically depending on their usage.

The versions before Angular 9.0 would make use of the ng build command, the whole application gets recompiled. The Angular components were familiar with all the dependencies themselves.

For example, any application comprised of *ngIf then would also know what this *ngIf needs to compile. To make changes to any of the *ngIf dependencies, all components contain  *ngIf is to be recompiled.

It came up with an idea of the Locality Principle bringing forth single file compilation.

Now the components contain *ngIf is not aware of any dependencies. So if some component is recompiled, nothing else will be needed to recompile putting an end to global recompilation.

Both IOT & IVY helps in the creations of applications. To initiate AOT for execution, open the angular.json file, and set AOT to true.

The relation between AOT & IVY is vital as both are known to speed up creations of applications. To activate this, you need to open the angular.json file and AOT to true.

With the advent of Angular 9.0, the community can primarily benefit from smaller & high-performance applications. Hence, producing a better developer experience. Giving developers a clear understanding of syntax and the project structure.

In a nutshell, the team is likely to work on developing components and directives According to the Angular team, it is notified that there won’t be any need for a significant API change. The expertise of the Indian developers will ‘keep the ball rolling’ in the Angular ecosystem.