Angular vs. React vs. Vue: Which One Is Right for You? 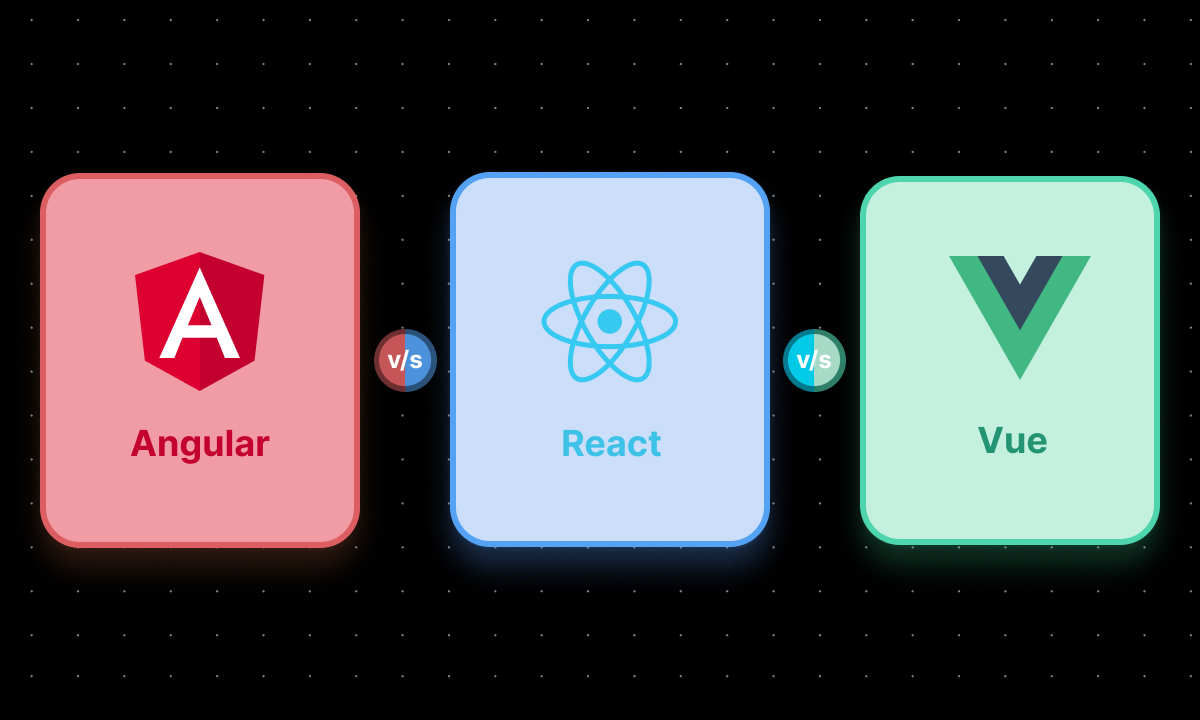 Angular, React, and Vue JS are three of the most popular JavaScript frameworks around today, and rightly so. These frameworks have revolutionized web development over the past few years, and their popularity isn’t slowing down anytime soon.

In fact, many developers predict that the three leading JavaScript frameworks will continue to become more dominant throughout 2022 and beyond.

Here, We Will Seek The Best Javascript Framework For Your Next Project

Even StackOverflow survey reports that React is used most of the time while developing any web development project, followed by Vue.

However, with the rise of Angular 4, React 16, and Vue 2, it’s hard to keep track of which framework you should choose to build your next project.

Also Read: Vue.js Is Good, But Is It Better Than Angular Or React?

To help make your decision easier, we’ve chalked out this guide on Angular vs. React vs. Vue, outlining the strengths and weaknesses of each platform while recommending which one you should choose to build your next web development project.

So let’s dive in!

Angular is an open-source JavaScript framework created by Google. It lets you create Single Page Applications (SPAs) that load faster and offer a smoother user experience.

It lets you use HTML as your template language and enables you to extend HTML syntax to express your application’s components clearly and succinctly.

Moreover, web developers have widely adopted Angular due to its productivity benefits. You can also take advantage of this by hiring dedicated Angularjs developers that will create a dynamic web app for your business.

React is a JavaScript library for building excellent user interfaces. It lets you develop reusable components to make code easy to read and maintain.

When someone interacts with a React component, React updates the component automatically. This makes your app more responsive and fast. Hire React js developers to make your web development project a big success.

Moreover, React is used by large companies such as Airbnb, Facebook, Netflix, and Walmart. Many new websites and apps are being built with React because it’s fast, scalable, and easy to use.

Also Read: React vs Angular: Which Is the Best JavaScript Framework

Vue is a progressive framework for building dynamic user interfaces. Unlike other monolithic frameworks, Vue is designed from the ground up to be incrementally adoptable.

The core library only focuses on the view layer and is easy to pick up and integrate with other libraries or existing projects.

On the other hand, Vue is also capable of powering sophisticated Single-Page Applications when combined with modern tooling and supporting libraries. You can also hire vue.js developers to get efficient apps developed in no time.

There are many reasons enterprises choose to use Vue.js when building web applications. Here are some key benefits of using Vue:

Now, as we have discussed the pros and cons of each framework, let’s compare them based on a Learning curve, Popularity, Ecosystem, Performance, syntax, Ease of App Migration, etc., to understand which would be a perfect fit for your web development project. 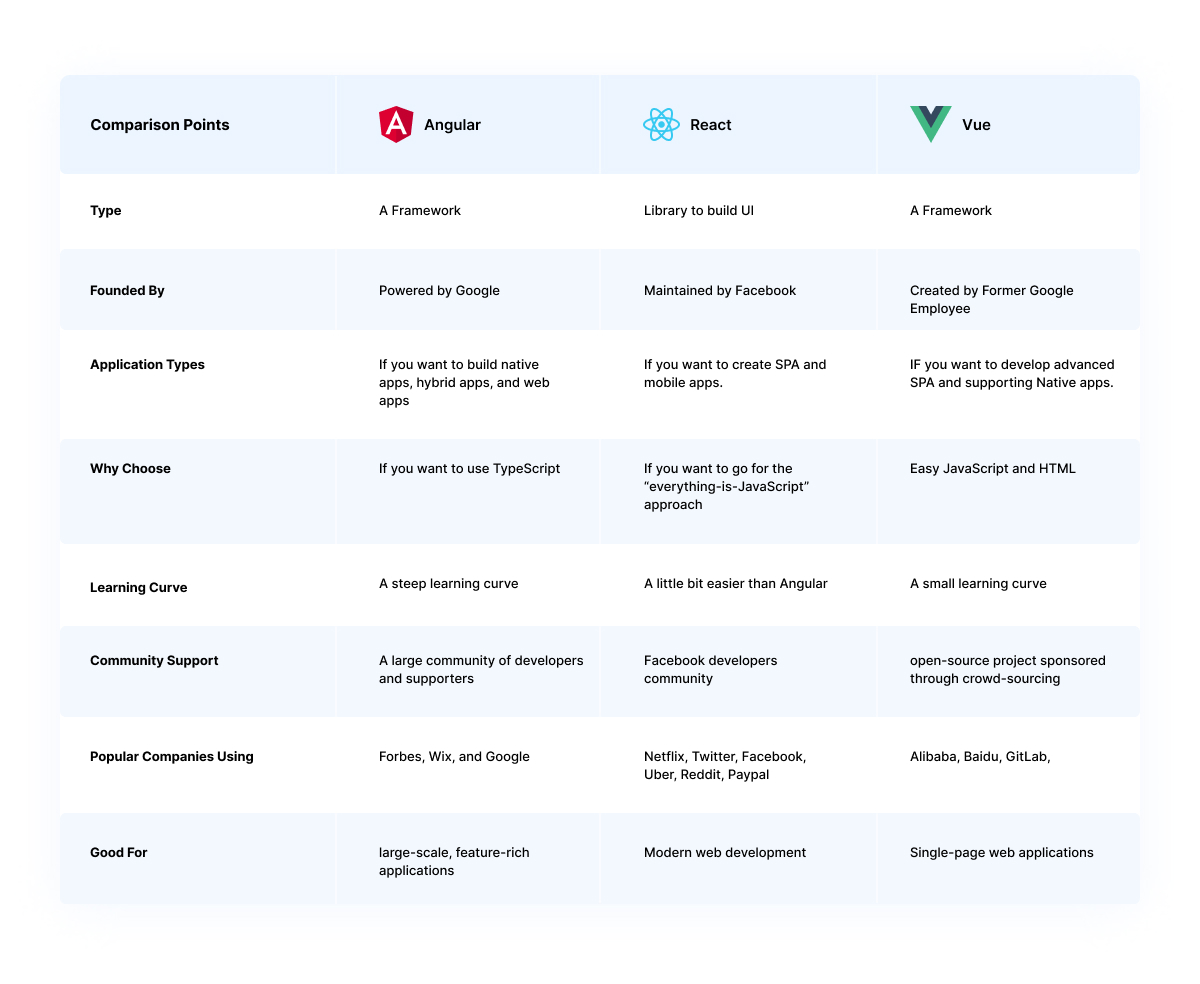 Angular, React, or Vue? The Best Way to Choose

Angular vs. React vs. Vue: A Comparative Analysis

“Angular, React, and Vue” are all popular JavaScript frameworks. Angular is a full-fledged framework, while React and Vue are lightweight libraries.

Moreover, Angular is still the most popular framework in terms of market trends, followed by React. You can also contact an Angular development company in India to reap the benefits.

However, Vue is quickly gaining ground and is expected to continue to grow in popularity in the coming years.

Also Read: AngularJS vs ReactJS : What’s good for your business?

Angular uses TypeScript, a superset of JavaScript. React uses JavaScript. Vue can use either JavaScript or TypeScript. Each language has its advantages and disadvantages.

Angular, React, and Vue all have various development tools available. Angular has a wide range of IDEs and extensions available, while React has a smaller selection but still enough to get the job done.

Vue also has a good selection of IDEs and extensions. Enterprises can choose from various options, while start-ups and small businesses may be better off with a lighter-weight option.

Angular is a full-fledged framework with various features, which can make it challenging to learn for beginner developers. React is a lightweight library that is easier to learn, but it lacks some of the features of Angular.

Vue is a progressive framework that strikes a good balance between learning curves and features. It is easy to learn for beginners but still has advanced features for more experienced developers.

The syntax for Angular, React, and Vue is different. Angular uses TypeScript, which is typically a superset of JavaScript. React uses JavaScript with JSX, which is an extension that allows you to embed XML in your code.

Vue uses HTML with a particular attribute syntax. Entrepreneurs can choose the syntax that best suits their needs.

One of the crucial considerations while choosing a JavaScript framework is the ease of app migration which means how easy it is to migrate an existing app from one framework to another.

Angular has the most challenging migration path, followed by React. Vue has the easiest migration path as it is compatible with other frameworks and libraries.

Each of these frameworks has a different ecosystem. Angular is a complete framework with a large number of features and libraries.

React is a lightweight library that focuses on the UI. You can also get in touch with a top-class React development company in India to develop efficient user interfaces for your app.

Moreover, Vue is a progressive framework that can be used for both small and large projects.

Angular and React both uses a component-based architecture, while Vue does not. However, Vue provides support for components, making it possible to develop component-based applications using the Vue framework.

When choosing a JavaScript framework, it is essential to consider scalability. That is, how well the framework can handle large-scale applications.

When choosing a JavaScript framework for your next project, it is crucial to consider the various factors mentioned above. Each of the frameworks has its own advantages and disadvantages, so you need to decide which one fits your needs best.

Angular is a full-fledged framework with a wide range of features, while React is a lightweight library that is easy to learn. Vue is a progressive framework and has its major uses in both small and large projects.

Hence, All three frameworks are capable of delivering high-performance applications. You can also get in touch with a top-class custom software development company like ValueCoders to get an efficient app developed for your business.

Q1 What is Angular?

Angular is an open-source web framework created by Google. It builds user interfaces and web applications. Angular consists of a Typescript-based language, tools, and frameworks that work together to make development easy.

Q2 What are the top benefits of using React?

There are many benefits to using React over other front-end frameworks. Some of the top benefits include:

1. Increased speed and performance due to its component-based structure.

2. Easier development and maintenance due to its declarative nature.

3. Improved cross-platform compatibility due to the use of JSX.

5. Enhanced developer productivity through the use of hot reloading and other features.

Q3 What are the top companies using Vue?

There are a number of top companies using Vue. Some of the most notable ones include Al Jazeera, Netflix, and LINE. Each company has found different ways to utilize Vue’s capabilities in order to create dynamic and engaging user experiences.

3 thoughts on “Angular vs. React vs. Vue: Which One Is Right for You?”