Objective C Vs Swift: What Should A Startup Choose? 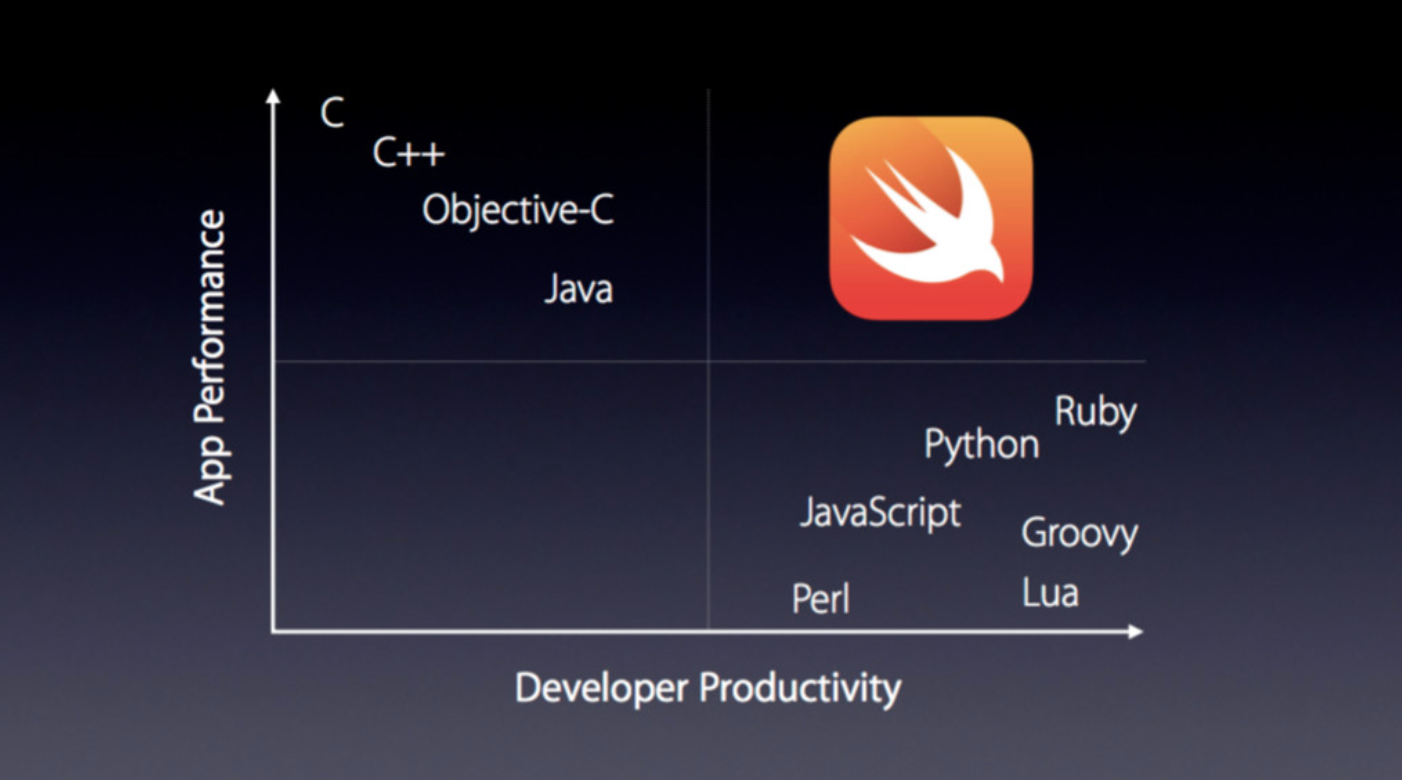 In our last blog, we considered Swift Programming Language as one of the most popular mobile app development trends that are going to conquer in 2019.  And that’s quite a fact! Swift has already taken over Objective-C slowly and smoothly in December 2016. Before going into a detailed conversation about Objective-C vs Swift check out the winning number: 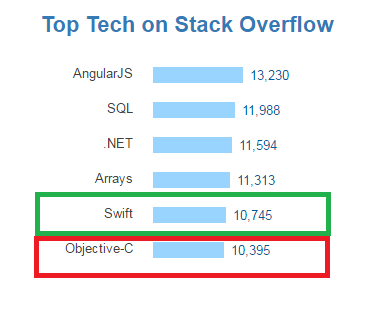 However, many have missed that the trend is going somewhere else. Some top-notch giants like IBM, LinkedIn, Facebook, Uber, Mozilla were already involved with app development with swift. But now, worldwide startups (Including the fast-growing ones in silicon valley) are focusing on Swift too. A study from UpWork shows app development in swift is one of the top fastest growing skills for startups and freelancers.

Also Read: Will Micro Apps Become A Trend In 2019?

Before we discuss Objective C vs Swift, here’s some crisp information about Swift’s background:

Swift is a programming language from Apple that’s characterized as “Objective-C without the C”. It was introduced at WWDC in 2014 and announced open source in 2015. After it went open-source, IBM and Apple jointly started investing in it. App development with swift is supported for iOS, OSX, watchOS, tvOS, and last but not least Linux. It has got five major version releases to date. Swift 2.0 in September 2015, Swift 3.0 in September 2016, Swift 4 in 2017 and the latest Swift 5 launched in March 2019. Now it is one of the top trending techs on Stack Overflow crossing Objective C. 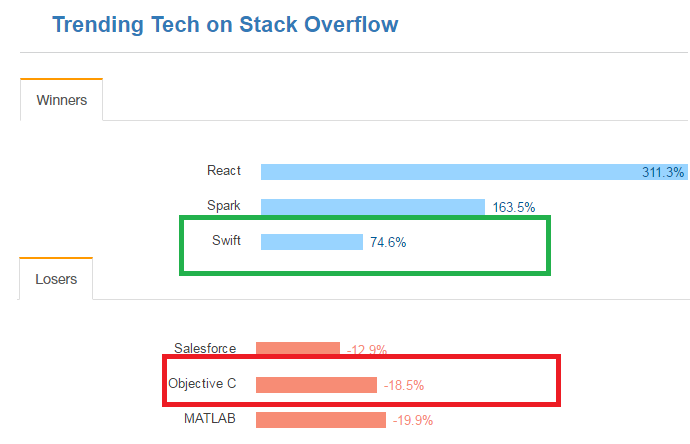 7 Reasons For Startups To Adopt Swift Over Objective C

Swift has taken off successfully not only because it’s well structured & designed, but also people have supported it. Moreover, independently managed conferences such as the Swift Summit help to enrich their community. Let’s discuss on Objective C vs Swift to see what’s there for startups to adopt this language.

An open-source programming language makes it immediately accessible as well as less costly for startup companies. According to studies, open source software/languages collectively help business owners save around $60 billion per year.

Swift, being a programming language is available on both Linux and Windows. With the support of the open-source community, Swift shows great potential and it’s growing really fast. From 1980 to 2014, it was a monopoly for Objective-C to develop native iOS apps, however, the Swift programming language has brought an end to that era. Here’s a glimpse of the growth:

One of the biggest challenges for startups is shortening time to market. They need quality products in less time. The Swift programming language can help you with that.

With Swift package managers, developers can push their packages to collaborate with others, focus on the logic and utilize different packages to quickly assemble apps in order to reduce time to market. There are also different repositories of Swift package managers like IBM Swift Package Catalog, which offer high-quality dependency management and easy coding options for Swift application development.

Swift as a functional programming language supports passing functions as variables. As a result, you produce highly generic code that can do a lot of amazing things hence, reducing repetition as well as efforts for app development with swift.

On the other hand, on behalf of Swift’s predictable behavior when a nil optional variable is used, Swift instantaneously triggers a run-time crash. The crash fuels up the bug-fixing process due to its consistent behavior. Swift forces you to fix the issue right away. This in return, reduces development time for application development with swift.

4) Safer and Easy to maintain Objective C vs Swift

Safety is a crucial aspect when it comes to mobile applications. In this competitive marketplace, a startup should concentrate on developing a secure app. Moreover, if the app is easy to maintain then it’s a boon indeed.

Swift programming language offers both the benefits at a time. Be it the way it handles bugs or calls the pointer variables, it produces safer apps than Objective C. On the other hand, Swift app development is much easier to maintain as it does not have any legacy. Objective C cannot evolve until C evolves, however, Swift does not have such dependencies which makes it easier to maintain.

If you want to hire iOS developers to develop Native apps, Objective C and Swift programming language are the only choices. As per a survey from Stack Overflow, Objective C developers are the highest paid ones followed by Swift developers. Here’s is the list: 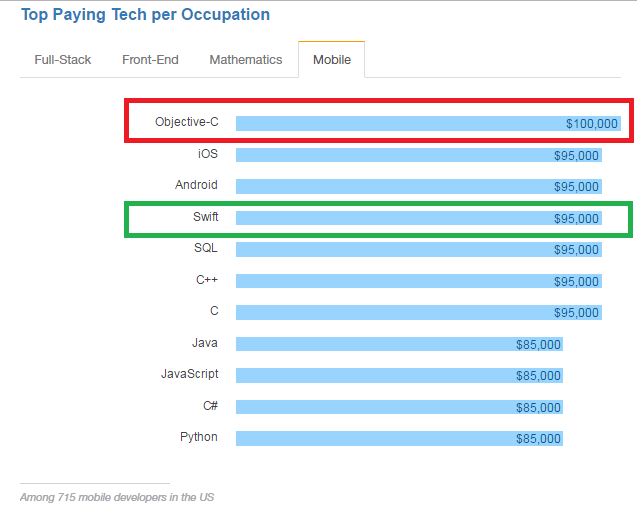 6) Swift has a bright future

Swift is a very organized & well-designed programming language from Apple. It is faster than Objective C, offers unified memory management, it’s intuitive, clean and expressive which allows you to express the intent of the code without the language getting in the way. This is for certain that this language is not going anywhere in the near future at all.

Also Read: Why Is JavaScript The Programming Language Of The Future?

One of the most important factors for the success of any programming language is the developers. Developers focus on and embrace the modern technologies in order to make the development environment fun and engaging  to retain top talent. According to a 2016 study in Stack Overflow, Swift is one of the most-loved language, receiving votes from 72.1 % of developers. Also, swift has a large developer community which makes it more supportive and interesting for startup app development. 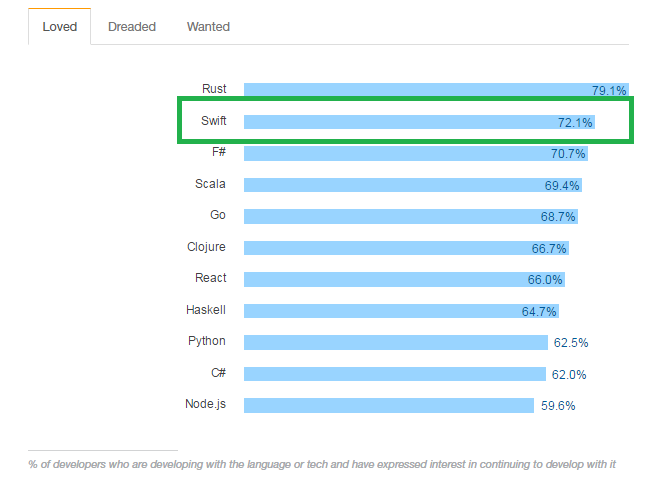 Watch this video to know more about Objective C vs Swift more:

The bottom line of Objective C vs Swift

In the competitive business environment where time is a deciding factor for startups, it is a major decision to take whether they want to switch to a new programming language or not. However, if you/ your iOS developers are already using Objective C, then you have a head-start and don’t need to learn an entirely different language as the learning curve towards swift app development will be easy.

Moreover, your efforts are justified as application development with swift is advanced, open-source, faster,  more secure and developer friendly. Hence, it’s time to adopt the change. In case, you want dedicated iOS developers, ValueCoders can be your choice as we have a pool of developers adept in Swift programming language. Contact us and we would be happy to help.

2 thoughts on “Objective C Vs Swift: What Should A Startup Choose?”