Now it’s half past 2018! Ruby on Rails is now 14 years old. According to the latest usage information on BuiltWith.com, Ruby on Rails is currently being used on a total of 1,076,238 active websites. Also, this widely used programming language is currently used by a number of high traffic sites such as WhitePages, Urban Dictionary, Yammer, Basecamp, Square, UserVoice, Yammer, Soundcloud, and Intuit Community. RoR is also used to create eCommerce websites. Is Ruby on Rails dead?

However, these numbers do not define RoR’s current status. Back in 2011, Rails was largely dominant in the server side MVC  market. Laravel was not yet born, the knot was only recently born and was not really coming up with his own MVC, ASP is experiencing a tremendous decline in popularity (it’s still, but steadily). 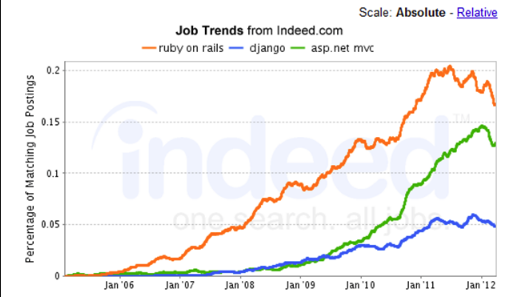 Yet in 2018, for the first time, Django and Laravel tended to be higher than Rails. A little bit – surely, but it will still show you how absurd the programming world can be. Here’s the snapshot- 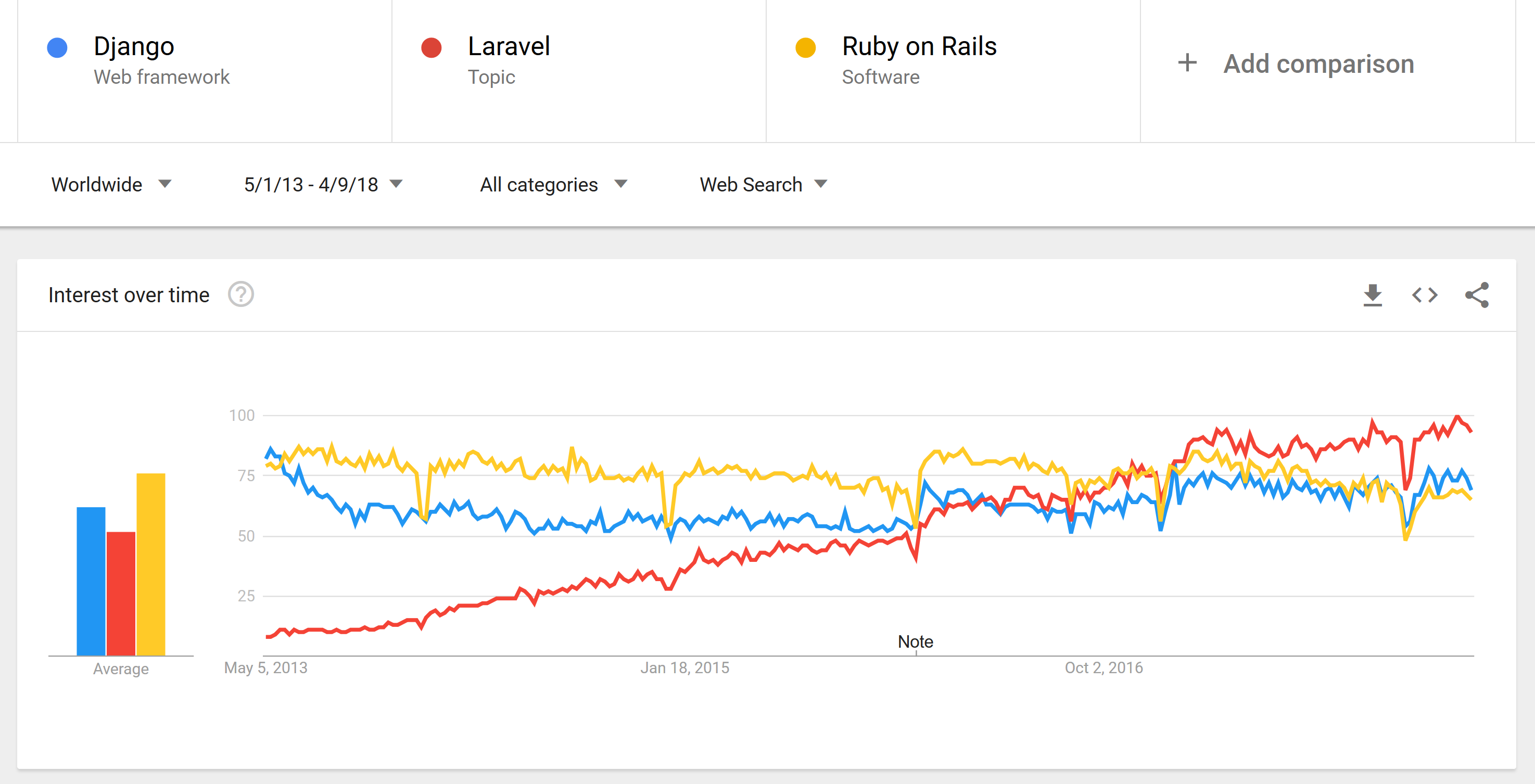 Hence, it is quite evident that the glory days of Ruby on rails are not coming soon. However, now comes the million dollar question: Is Ruby on Rails Dead?

Is Ruby on Rails Dead?

With a constant decline in popularity and competing with the new technologies like Laravel and Django, Ruby on Rails is quite tired but certainly not dead. Here is why-

Ranks Top On The Chart

According to recently published rankings by RedMonk, Ruby takes the 8th place and belongs to Tier 1 programming languages. And on Stack overflow it occupies 13th spot leaving Swift behind.

Ruby’s famed Rails framework has almost 3,500 contributors on GitHub. By contrast, the Django framework for Python has fewer than half as many contributors (slightly over 1,500).

Rails community is active and new contributions are made regularly, as these statistics from GitHub show.

A strong community crafts a lot of open-source libraries (gems) for Rails, helping developers create functional and secure applications better and faster. Developers share their experience, troubleshoot problems, and help each other.

An active community also means ample documentation, so Ruby developers can easily find detailed explanations and guides to gems they want to use.

Ruby Is Perfect For Startups

Among a host of programming languages, Ruby can be a great choice for startups. With its simple and intuitive coding style, Ruby offers app development and saves time: on an average, developers build applications with Ruby on Rails 30-40% faster than other technologies.

Needless to say, shorter development time influences savings for startups who are likely to have a budget constraint. Moreover, Ruby on Rails is an open-source language that means there is no cost in buying it and a variety of open-source gems enable you to implement rich functionality in your apps.

The money saved can be invested in the implementation of additional features and making an application more functional and helpful to users.

Ruby on Rails keeps improving with each update. Each new version of RoR receives a lot of improvements that make the language cleaner, faster, and safer. From 2004, Rails had 336 total updates including the last one 5.2.0  which came on April 09, 2018.

There’s a bit of bias around Ruby due to its presumably low performance. Being a dynamic programming language, Ruby is truly slower than its statically compiled counterparts, such as C or Java.

However, Ruby is fast enough to power the vast majority of web applications and if an app hits a lucky streak and grows viral, it can be easily scaled to match the growing load.

Though the golden days are gone and many other technologies have emerged, Ruby on Rails is staying strong and has a decent number of followers. If you are a stratup and planning for a product development, RoR can be your choice.

Hire Ruby on Rails developers from ValueCoders and opt for Software product development services. We have built hundreds of digital products with RoR and provide fast development to Startups and SMEs.