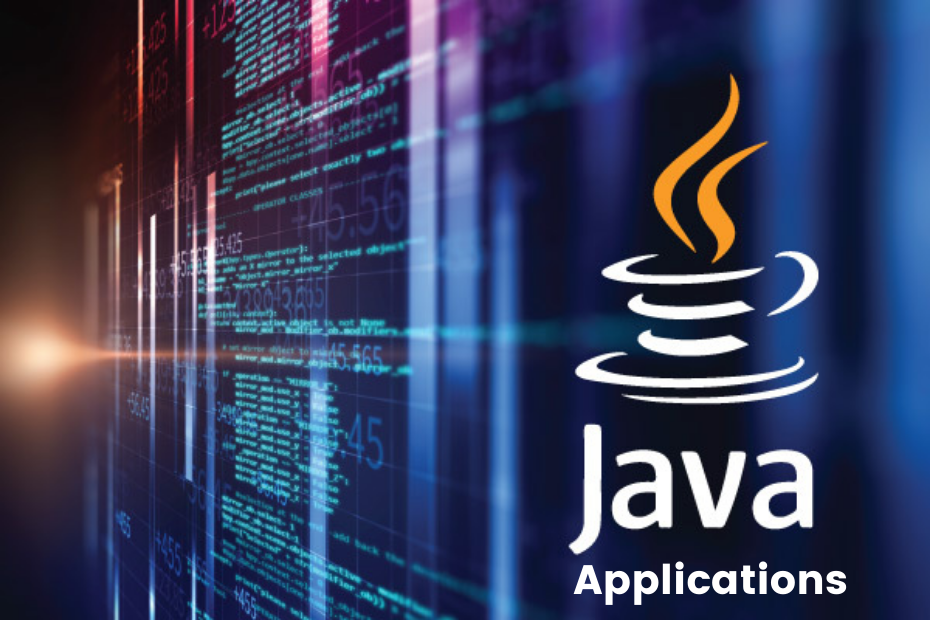 Java needs no introduction! As one of the most used programming languages, Java has its own identification. It has been considered the king of all programming languages. With 21% market share, the language is enthusiastically preferred for web, mobile, and enterprise application development.

Indeed, you would be having a number of questions such as: Where can you use Java? What are the applications of Java?

Don’t fret! Let’s take a glance at the famous java applications in the software development landscape.

The Android OS closely relies on Java, and that’s why the majority of app developers use it. Besides this the fact that most mobile phone brands have an 85% market share in 2018, which offers great opportunities for all kinds of businesses.

Plus, adding business-friendly features like Kotlin or compatible programming languages such as Java ME (or J2ME) gives apps more cross-platform support across devices running different versions of the Android operating system.

Mobile computing in combination with java app development has become increasingly popular as more and more people move away from desktop computers. Because of this, we can conclude that within the next few years, Java will be a required skill for most jobs in all industries.

Creating GUI interfaces has never been easier with Java. A Graphic User Interface (GUI) or Graphical User Interface is used to present information graphically, whereas a Command Line interface needs users to type in commands on an input device like the keyboard before they can receive feedback from their actions.

Swing is a GUI widget that offers advanced elements such as lists, scroll panes, tables, tabbed panels, and trees. The demand for desktop applications hasn’t disappeared because of mobile computing dominating the market today, and programmers can develop any application with these tools.

Web applications are a great way to build useful tools that can help businesses grow. Java provides high security and simple coding, two things web app developers need to create their apps. With servlets, Struts, and JSPs, as well as open-source e-commerce platforms like Broadleaf at your fingertips, you have everything necessary for building awesome programs!

The input does not say anything about how effective these elements or frameworks may be in writing Java-based web apps. The Java technologies you’ll use to create web applications require a container or web server that recognizes and runs the classes you create. In order for many of these technologies to work on a server, it must have this installed.

Moreover, a web application built with java is admired for robustness and scalability. So, you must embrace java web development to create a secured web solution.

While many other languages like Python, PHP, and Ruby are widely used to create web applications today, Java is still the most popular choice for enterprise programming. 97% of enterprises use it on their systems.

Banking institutions rely heavily on Java because its high-performance capacity makes it ideal for back-end servers that deal with financial transactions; Finally, Murex uses this language as well in order to make sure they’re always using cutting-edge technology when developing software.

Java Enterprise Edition (Java EE), recognized as being the foundation of many banking applications, is 97% owned by enterprises. Java runs on enterprise-owned computers, and it also has high performance that makes it a smart choice for front-end users to back-end servers alike.

The input contains all of the necessary information but does not include any creative writing or additional details about what sets Java apart from other languages/frameworks in this industry aside from “its capacity for sustaining high performance.” To leverage its capacity, hire a Java developer that can understand your business need and deploy.

The web and application server space is full of servlets like Apache Tomcat, Rimfaxe Web Server (RWS), Project Jigsaw, and others. Meanwhile, in the commercial marketplace, there are well-known names such as WebLogic, JBoss EAP, and IBM’s own WebSphere.

The thriving Java ecosystem has given rise to a variety of web and application servers. Some notable examples include Apache Tomcat, which is primarily used for servlets but can also be configured as an HTTP server or support applications written in any programming language that adheres to the JVM’s API.

Project Jigsaw, a tool designed by Oracle Corporation with modules such as “javax.servlet” and “javaee”, will offer developers more control over how their code is deployed on WebLogic Server 14c (WLS) through better modularization of monolithic frameworks like EJB 3/JAX-RS into smaller components; — Rimfaxe WebServer (RWS), which allows you not only run multiple.

Our lives are surrounded by embedded systems. We may not realize it, but our car’s motor system is an example of this type of computing unit as well as entertainment and multimedia in a car, E-commerce — the technical side for online shopping which we all use today-, wireless communication such as WiFi or Bluetooth technology that allows us to connect two devices wirelessly via radio waves., mobile computing and networking.

As you can see, these types of units drive many parts within our society from improving convenience at home with smart appliances like microwaves, ovens, or dishwasher machines to making transportation easier with technologies built into cars themselves instead of having them installed after purchase.

Embedded systems are present in many products we use daily, some of which might surprise you. For example, A car’s entertainment and the multimedia system uses an embedded system to function properly; E-commerce stores like Amazon or eBay wouldn’t be possible without them either!

Owing to innovation in embedded systems, companies are preferring to outsource java development to procure the best skill set that can bring unthinkable solutions in digital reality.

Java is an ideal programming language for big data. It allows the integration of different sources into one platform; this makes it easier to analyze and extract valuable information from all your datasets.

Today many programmers are starting their careers in Big Data Technology because Java provides them with a wide range of opportunities when looking for jobs or new projects that allow you to develop skills in handling large volumes of data while working on interesting problems at the same time.

Even big data technologies like Hadoop and ElasticSearch use Java in some way or another; for example, Apache’s open-source projects such as HBase and Accumulo are written in Java too.

Related: Best Java Web application framework for your next Project

Today’s world of technology is a fast-changing one, where new applications and systems are being created to suit the expectations of our ever-changing society. Moreover, enterprises are enthusiastically adopting java application development and keep on innovating.

One such application that has been common for many years now is the distributed system (also known as Distributed Application), which allows an application or software to execute on multiple computers within a network.

Java offers options when it comes to creating these types of apps due to its flexible nature and ability to adapt easily in various environments; this includes cloud computing platforms like Google Cloud Platform!

The Jini (Java Intelligent Networking Infrastructure) gives an infrastructure to provide, register, and find distributed services based on its specifications. An essential part of Jini is JavaSpaces that supports distribution, persistence, and migration of objects in a distributed environment.

Cloud computing is a concept for enabling ubiquitous, convenient, on-demand network access to a shared pool of configurable IT resources (e.g., networks, servers, and storage).

The benefits can be reduced costs due to lower infrastructure investments; flexible resource allocation as users do not need specific hardware assigned for their use; increased availability because of the ability to deploy instances rapidly in response time demand — all while helping us reduce greenhouse gas emissions by reducing physical footprint demands.

There are many cloud development tools available, such as Oracle Java Cloud Service. It allows developers to build and configure the servers remotely or share data with others according to their needs.

Today, almost everyone has an Android phone which means they also have access to the many games available on their devices. Games cannot be built without Java because it is one of the best platforms for developing 2D games and supports jMonkeyEngine — the most powerful open source 3D engine that can design 3-dimensional games.

The reason why developers prefer to use Java for Android apps is that the language supports the Dalvik Virtual Machine, which was created specifically for Android devices. Java app development has significant attention in the marketplace and a huge number of developers to empower you with creativity.

Related: 7 Java Web Development Technologies You Must Know In 2021–22

Although there are many other languages such as Javascript and Swift, the language used for apps on Android devices is mainly Java. This makes sense because it’s specifically designed to support Dalvik Virtual Machine, which allows developers to use lower-level functions of an app while still maintaining a high level of security in their application.

Although we may think that only applications like banking ones require this much security (which they do), when developing any kind of software, you should opt for using technology with dominant features so your customers can rely on its performance and safety.

Java is dominating the marketplace for years and will continue to thrive at a constant pace. If you want to leverage this bespoke technology, you must connect with a deft java application development company that can bring unique ideas into reality and help your business thrive. 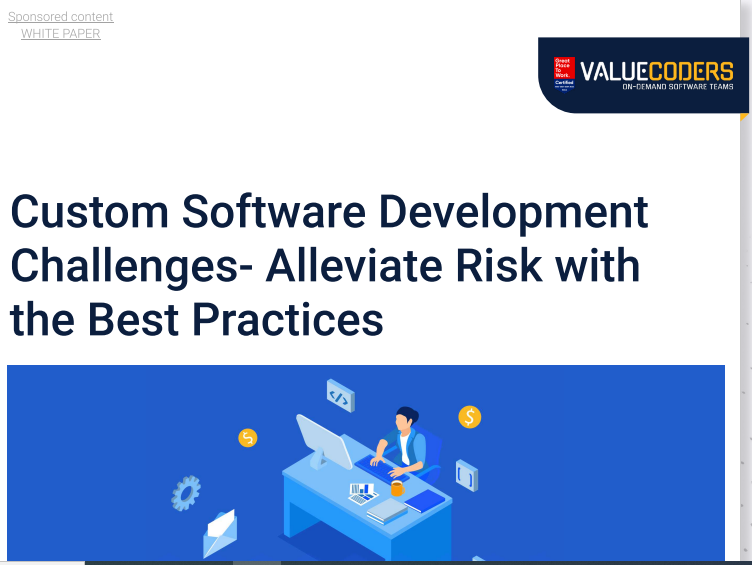 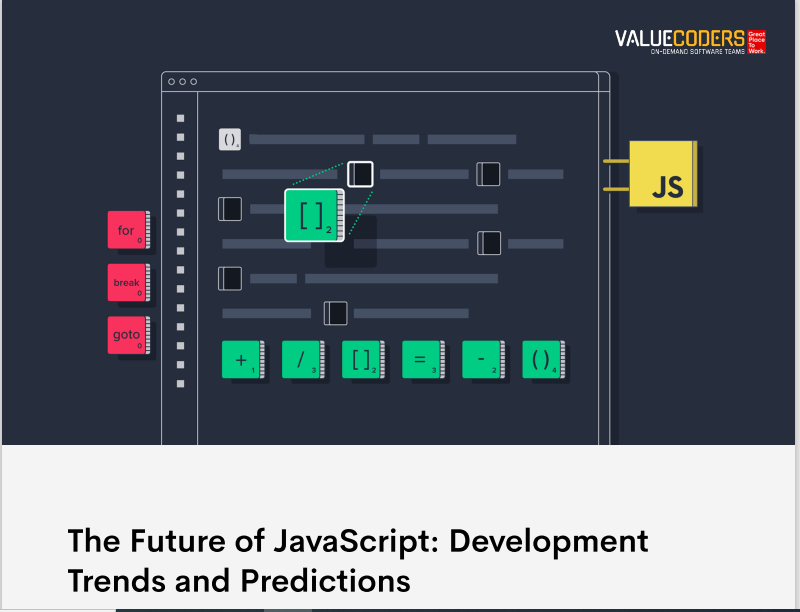 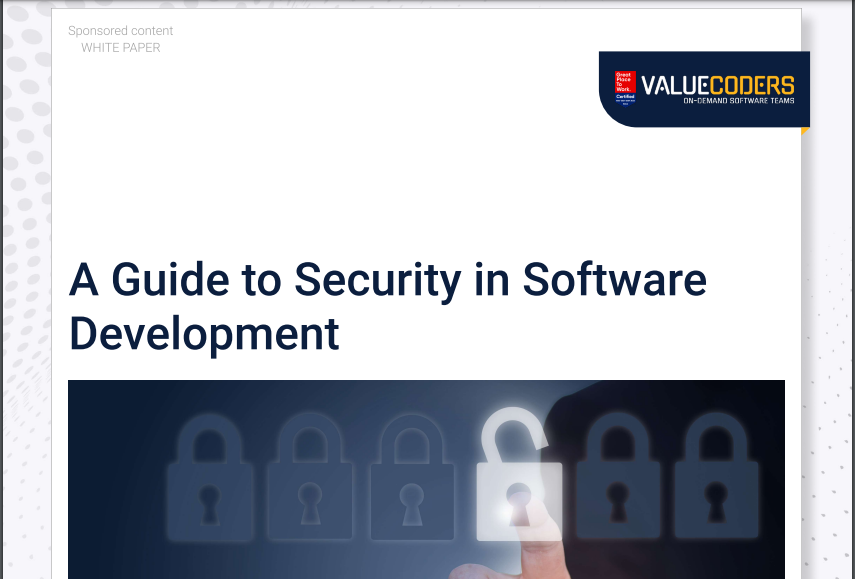 A Guide to Security in Software Development – White Paper